Woolworths opened in the Hampshire town of Eastleigh in 1927. It started off as a small store on the left-hand side of the ‘Eagle Building’, pictured below. The Eagle Building was “so called on account of the 8ft-wide eagle in terra-cotta placed at the top. Built by William Wallis at the turn of the century it was a remarkable feature in a town of only about 5000 people.” [Extract from Around Eastleigh including Chandler’s Ford, Bishopstoke and Botley Living Memories.]

Soon after the above photo was taken in the 1950s, Woolworths acquired the whole of the Eagle building and sadly were given permission to demolish the three central sections in order to expand. Although I love Woolworths, I do feel historic architecture should have been kept. Anyway, they built this rectangular block in the middle, keeping the smaller sides of the Eagle building as they were. A glass veranda was added, perhaps to give a Victorian shopping feel.

Now, interesting fact, did you know that Benny Hill worked here in his youth? The store lasted until the end, and as you can see, it was a large store. 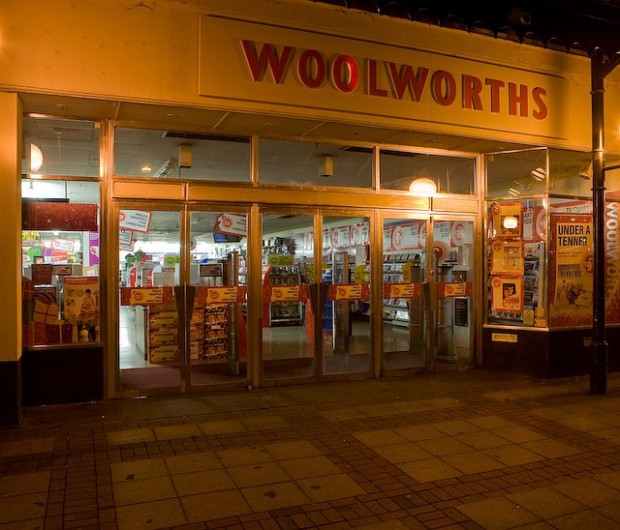 Today it is a Poundland. They have kept the Woolies doors and windows, simply painting them in Poundland green. And look to the right on the upper floor, you can see the part of the Eagle building that was kept.