Woolworths opened in Elgin, which is on the northern  side of Scotland, in 1928. It was a plot on the corner of the High Street and North Street, opening in an existing building that originally was the A and W Reid Bank from 1856. The building stands out from its neighbours, being brightly painted in cream with red window frames. And it was quite a long store, going far down North Street. It was extended over the years, and there was a fire during one of the extensions, which has been written about here.

I have my own story about Elgin. I was a buyers assistant in Confectionery in 2003/4 and in charge of sandwiches. Elgin store rang up as they wanted to be a sandwich store. I arranged for a chiller to be sent over, and informed our sandwich supplier. Then, AFTER the store was all set up to sell sandwiches, the supplier realised how far up north Elgin was and said they couldn’t deliver that far. OOPS. Sorry Elgin! 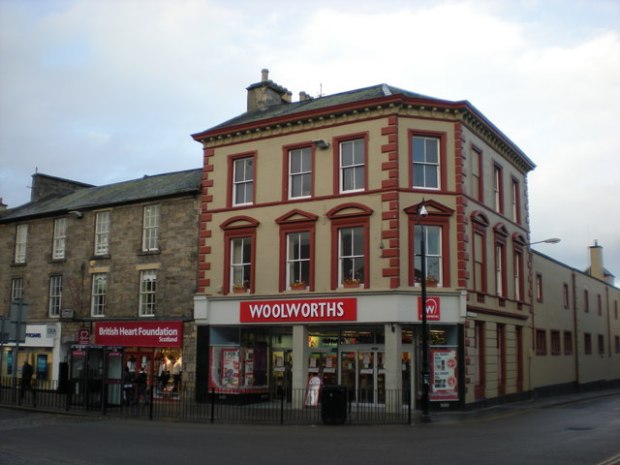 The store closed in December 2008 and today it is a Poundland. At the moment there is scaffolding all around the B-Listed building as it is unsafe due to water damage going right down into the basement and crumbling paintwork. It will take at least 2 and a half years to repair. This has people talking about whether the building was not looked after well enough while it was a Woolworths.