Woolworths opened in Clonmel, Ireland in 1931 on O’Connell Street. Below is a lovely close-up of the shop windows at Christmas time in 1967 – the posters reads ‘Your Christmas store’ and another poster says ‘This store will be open all day Thurs 8th Dec’. 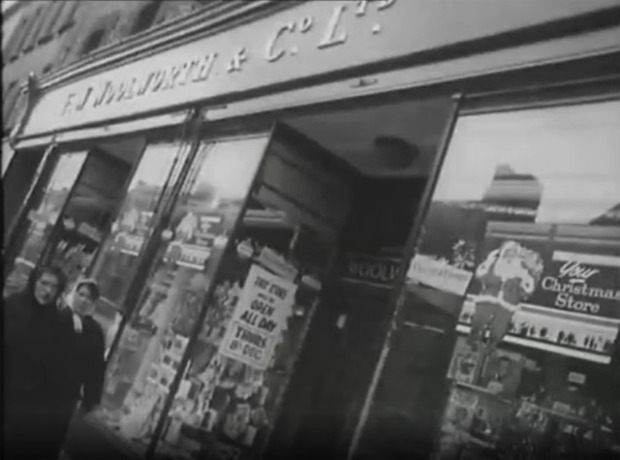 The store had a makeover in the 1970s and below you can see the updated fascia ‘Woolworth’ all in upper case.

The store closed down in 1984 when Woolworths left Ireland. Today Dealz (which is the name for Poundland in Ireland) is in half of the building, with a small clothes in the other half. 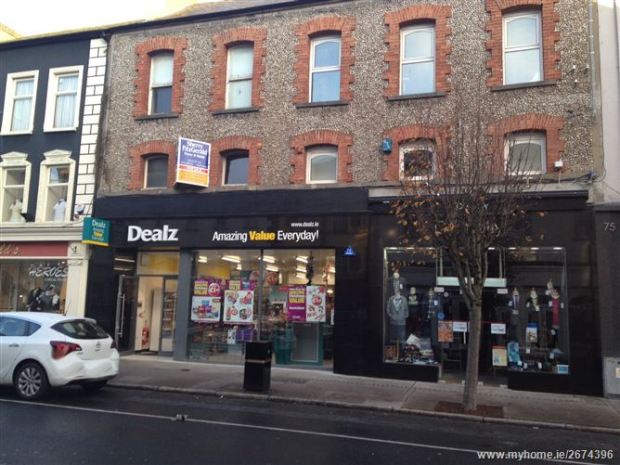 The nineth Irish Woolworths store opened in Waterford in 1930. An adapted version of the classic Woolworths architecture, with the pediment made of brick. On the shopfront, it looks as though they had kept a section on the left side to be leased out to another business.

Indeed in this photo we can see the small side is occupied by a menswear shop. 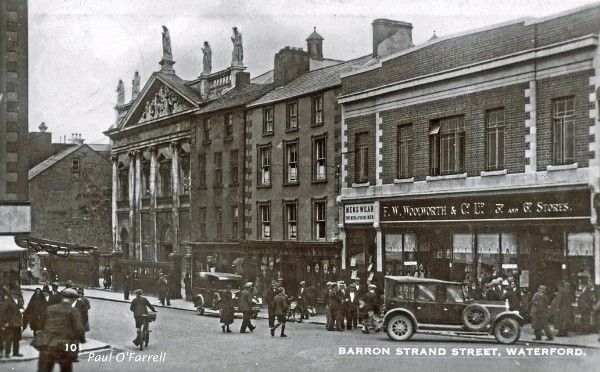 This staff photo was taken shortly before the store closed for good in 1984. Note the red and cream theme of the interiors and the boldness of the flooring. 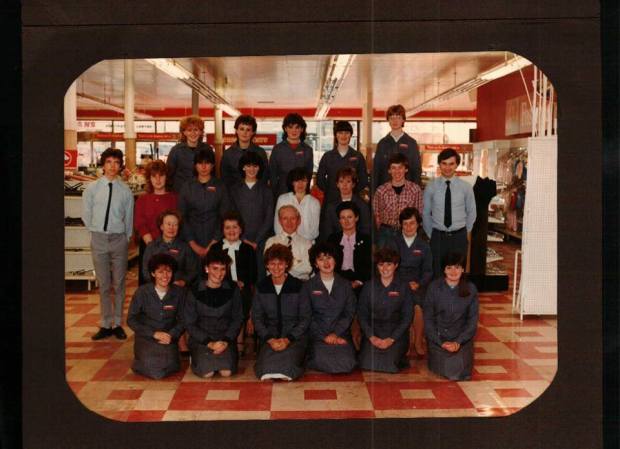 Woolworths left Ireland in 1984. Today the Waterford Woolworths building has gone, the space taken over by Penneys (aka Primark).

Woolworths opened its eighth Irish store in 1930 in Sligo. It was on O’Connell Street in a small purpose-built store, with the classic architecture, symmetrical with the central pediment. 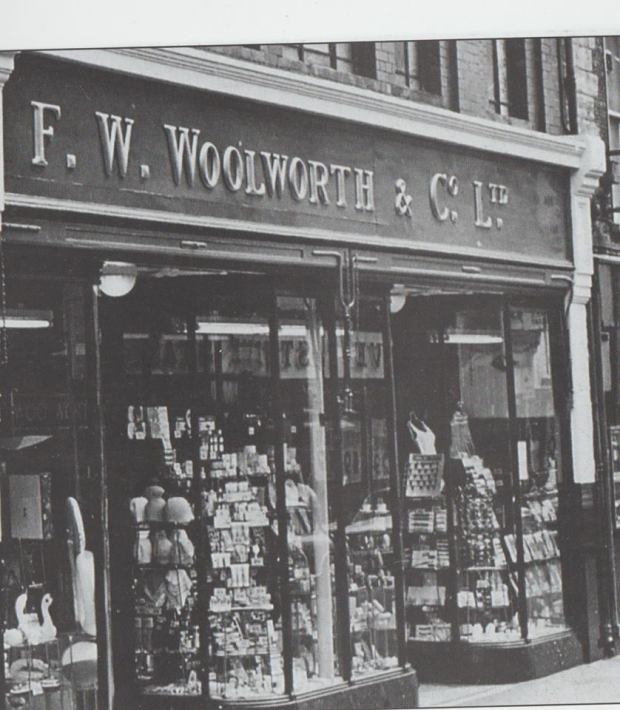 After 54 years of trading from this location, the store closed in 1984 when Woolworths decided to leave Ireland. The building today has changed in appearance and is occupied by the Poppadom Restaurant and Wallis.

Woolworths opened it’s seventh Irish store in 1930 in Kilkenny. It was on the High Street in what looks like a very old building. 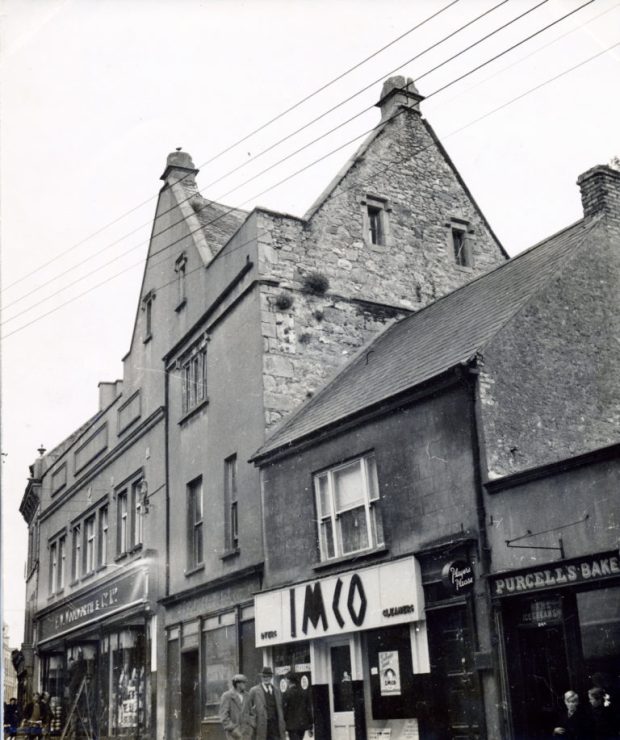 Having discovered the National Inventory of Architectural Heritage online, it says the building is a “Terraced four-bay two-storey building with attic, reconstructed 1928, incorporating fabric of earlier house, 1580. Renovated, 1949, with attic removed. Renovated with replacement shopfronts inserted to ground floor … Replacement timber shopfronts to ground floor with pilasters, fixed-pane windows, glazed timber doors having overlights, fascias having consoles, moulded cornices, and overlight to right having casement windows with rectangular recess over. Road fronted with concrete brick cobbled footpath to front. Appraisal: A large-scale building incorporating the fabric of a late sixteenth-century house having associations with Henry Shee and Frances Crisp, thereby representing an important element of the archaeological heritage of Kilkenny. Despite subsequent alteration works including the addition of replacement shopfronts of little inherent design interest, archival sources indicate that some of the early composition attributes survive intact to the upper floors including one of the gables distinguishing the site in the streetscape.”

Woolworths traded here for 54 years, until 1984 when all the Irish stores were closed down. Today it has been split into two units – a newsagents called Porter at number 91 and a bar called Paris Texas at number 92.

There have been two Store 337 Woolworths stores. The first was on Commercial Road in East London (E1) that opened in 1928. I can’t find any photos of it though. Sadly the store was destroyed by bombing in World War 2 and never rebuilt – presumably because it was too close to the Whitechapel branch of Woolworths. The number store 337 was later given to Tipperary in Ireland, which opened in 1954.

Woolworths opened in Tipperary in the Republic of Ireland in 1954 on Main Street. They traded here until 1978. That year it was reported that significant structural repairs were required to the store, and the company opted to close the branch rather than invest in the building. Woolworths did have 3 stores in the area until the 1970s (Tipperary Town, Clonmel and Thurles).

The store manager of Tipperary Woolworths was offered a transfer to England but instead with a local investor bought the building and opened a store called “Wellworths”  that is still trading 41 years later. (With thanks to Stephen Nolan for sending me that information)

Woolworths opened their sixth Irish store in Dundalk in 1928. It was on Clanbrassil Street. From these photos, it looks like there was a 1950s/60s makeover looking at the style of the building. The oversized text on the fascia makes an appearance here too.

With thanks to Stephen Nolan who sent me these photos. Store 331 in Dundalk closed in October 1984, and he tells me that as Dundalk is on the border between NI and RO, many of its customers would have transferred to the Newry store across the border after Kingfisher closed the ROI stores in 1984.
Here is a video of when the Irish stores closed.
Today the building still exists, though with triangular peaks added at the top. It is the Clanbrassil Centre, which houses lots of smaller shops.

The 97th Woolworths store opened in Limerick, Ireland on O’Connell Street in 1921. The building was the Limerick Furnishing Warehouse.

Extract from Limerick.com of Limerick Woolworths in the 1940s/50s:

“Woolworth’s now I can remember quite a number of stories about that store especially at Christmas. Going to shop with your 10/- shilling note to get presents for all your family. Purple bath salts in an ornate glass jar for a 1/- shilling, this was always for your Mother and 6d. hankies in a box for Dad. Counter loads of ‘sweets’ under the glass covers, biscuits lining the counter top from Jacob’s in their glass topped tins. You could buy a half pound of this kind and a half pound of another and you could also buy a pound of assorted broken biscuits for 3d.

Upstairs at Woolworth’s was always a winter wonderland at Christmas, at other times of the year this area held all the electrical and hardware goods for your home. But, Christmas was Santaland time, toys, decorations, christmas lights, sparklers and Christmas music playing are memories hard to forget. The boys chasing you to sprinkle you with ‘Jack Frost’. Do you remember?”

In 1963 the store was refurbished and had a brand new look.

Source: A Stroll Down Memory Lane

This was how the inside looked:

Source: From Limerick with Love

The store closed with Woolworths left Ireland in 1984.

Today the build still exists, it could do with a clean, The store has been split into three units – Wokking Restaurant (which is on the upper floors), Marco Polo and Carraig Donn. 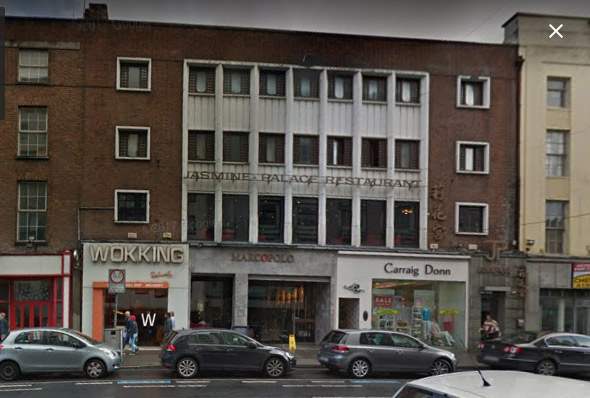 The 90th Woolworths store opened in Kingstown in Ireland, in 1920. In 1921, the town got renamed Dun Laoghaire (pronounced Dunleary). In the below photo you can see the store on the right with the three pointed roofs. 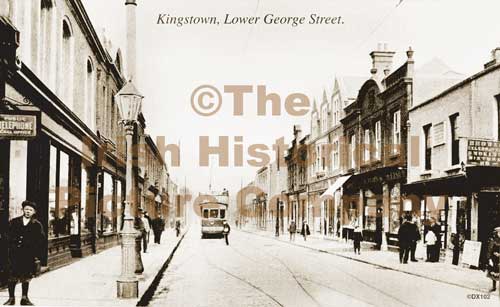 The store traded here for 64 years until Woolworths left Ireland in 1984. Since Woolworths closed, the building has been an M&S Simply Food.

Today it is occupied by a shop called Sostrene Grene.

Woolworths opened its third Irish store in Cork on Patrick Street on 6th February 1920. It was quite a large corner building. 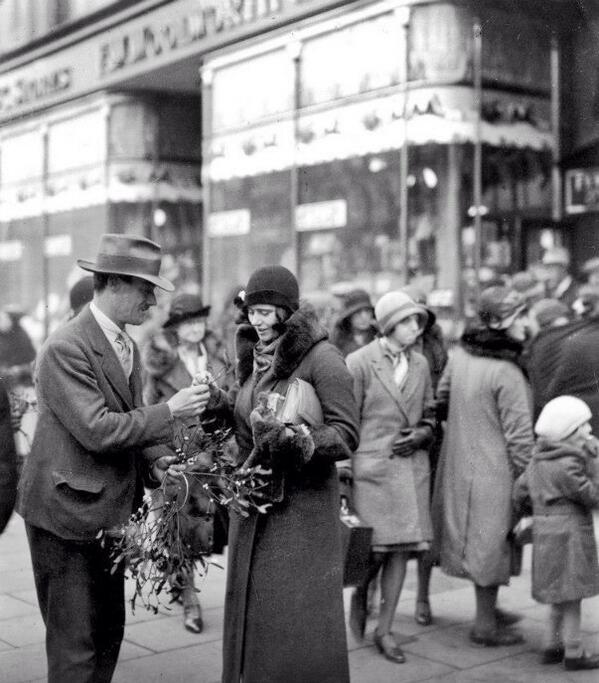 Cork Woolworths was a popular, busy store. Below are some 1960s photos. 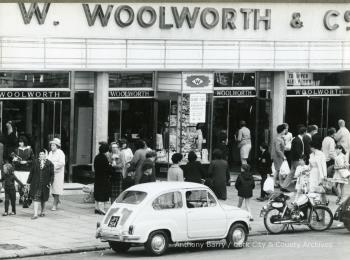 In 1974 it had a full refurbishment and you can see the new fascia in the below photo.

The store closed when Woolworths left Ireland in 1984.

Today the store has been split into 2 units. One was River Island until recently, the other is a bank.

Woolworths opened their second Dublin store on Henry Street in 1918. The building was purpose-built, as the building that had previously been on the site was destroyed in the Easter Rising of April 1916. You can see the year ‘1917’ in the gable as this was when it was built. The store was bigger than the first Dublin branch on Grafton Street (Store 31), with an entrance on Henry Street and another entrance to a shopping arcade.

The store was extended over time, taking over the two stores to the left.

Woolworths in Henry Street was famous in particular for its Ice Cream kiosk.

“Apart from cheap sweets and pop records, the great attraction of Woolworths for kids, and many parents, was its ice-cream kiosk. In the early 1930s, when refrigeration was still a novelty in many parts of the country, Woolworths had all the US-supplied equipment necessary to become the biggest seller of ice cream in Ireland. Queues formed in both of their Dublin stores from morning opening to evening closing to buy their famously creamy cones. Hughes Brothers (HB) won the contract to supply all of Woolworths’ ice cream in the late 1920s and the chain remained HB’s biggest customer until the late 1960s” Independent.ie 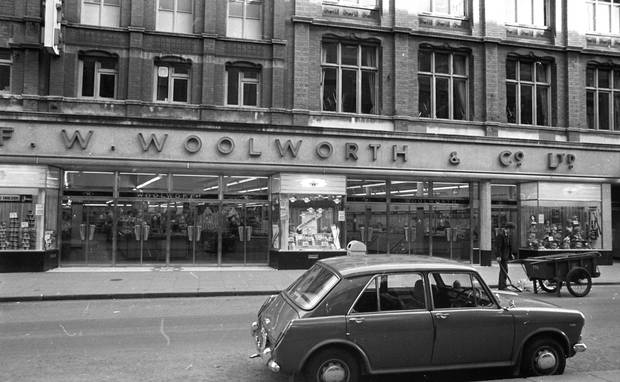 In 1980 the store had a full makeover with a new fascia and pastel-coloured modernised units inside (you can read more about that here, and the lead up to the closure of all Irish Woolworth stores). 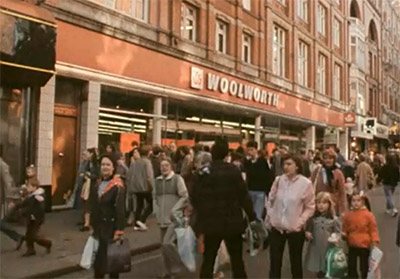 The store closed in 1984, and was sub divided into seven different units – four on Henry Street and three inside the arcade.

Today the original front of the building is occupied by Vision Express and HMV, with the extension occupied by Boots and Extrovert.  If you look above you can still see the original architecture.

With thanks to Stephen Nolan for his help on this post.

You can read about Store 75 Aberdare here

Store 31 was the first ever Irish store, opening in Grafton Street, Dublin, on 23rd April 1914. It was on a corner site in fine Edwardian red brick buildings, seen on the left of this postcard.

Opening in Ireland had its obstacles. The IRA formed in 1919 to bring about independence, there was violence and antipathy against any retailer selling non-Irish products and there were boycotting campaigns. Woolworths became increasingly reliant on Irish suppliers to fill their counters here.

In the 1960s it still had it’s unique look, but soon after it was replaced by the standard house style, with all three Edwardian buildings sadly being demolished. 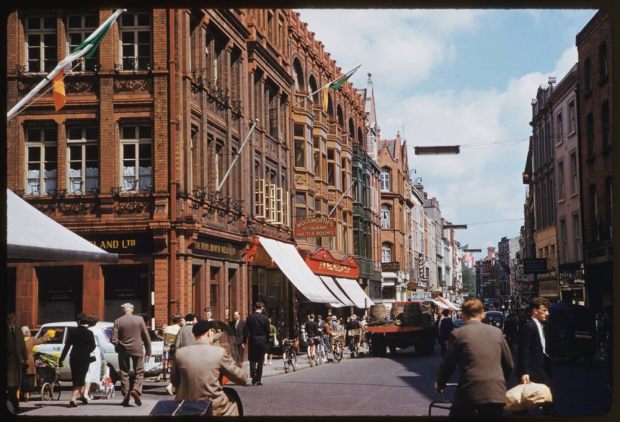 Source: Ireland Then and Now

The store closed in 1984 when Woolworths decided to leave Ireland. The building was split in two – one half was HMV, the other half Next.

Today the building shared by Massimo Dutti and Boss – you can see the 60s architecture with it’s triangular windows when you look up. And if you look next door at Monsoon, you can see how the original Edwardian building would have looked.

If you are looking for Store 30, Edgware Road, it has already been written about – you can read all about that store here.