Woolworths opened their 285th store in Guildford in 1927. It originally was at 56 High Street, on what you can see is a slope, pictured below. They traded here for 30 years before relocating across the road. This photo was taken just before the relocation in 1958, and there are posters in the window announcing the move, as well as For Sale signs.

Today WHSmith trades from this building.

In October 1958 Guildford Woolworths relocated to a huge purpose-built superstore at 55 – 57 High Street, on the site of the former Lion Hotel. Its frontage was specially designed as a gesture of local interest, including a striding lion rescued from the hotel pediment. This photo shows the queue of people outside on the opening day – it must have been an exciting event. A couple of doors up is Marks and Spencer – you can recognise the clock.

This is another angle of the queue.

Guildford was special as it was a test store for introducing a Food Hall, similar to how M&S is today. Previously Woolworths had tested out a stand-along supermarket store, such as at Hounslow – Store 106 – but this wasn’t a lasting solution. Guildford introduced a self-service ‘Foodmarket’ at the back of the store, with it’s own separate entrance on North Street. North Street is quite far back from the High Street, so this Woolworths store was very long. See the photo below, where you can see the new-style weighing machine in the window.

Look at this photo of the interior, kindly sent in by Richard Northover who found a 1959 Golden Jubilee edition of the store managers pictorial record. He tells me that ‘Woolworths were very much the forerunner of what we see in M&S foodhalls today. Foodhalls included tinned/dried goods, fruit and veg, delicatessen, butchery, bakery and wet fish. Sadly this was all removed in 1985 when Kingfisher started a huge sale of the big stores and cut down many others, the start really of a long sad decline.’ 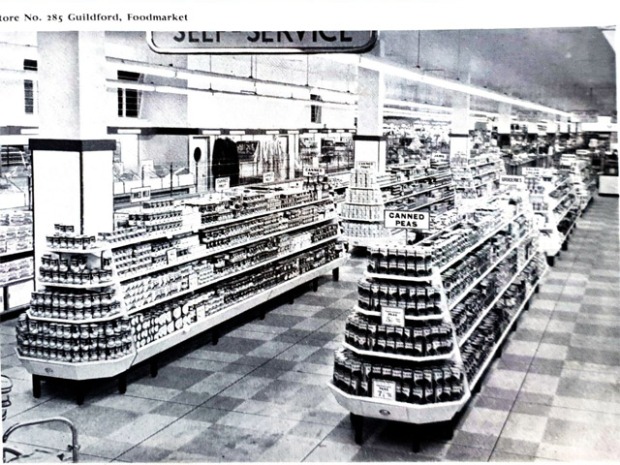 As well as the new in-store foodhall, Guildford Woolworths included the test design of a new cafeteria that ended up being rolled into many other superstore branches in the 1960s, with the name ‘Guildford-style cafeteria’. It was railed off from the sales floor, had a diamond patterned Formica counter front and rigid fixed seating, arranged in pairs on opposite sides of each table. [Extract from K.Morrison Woolworths 100 Years on the High Street] The seats were not very comfortable, being of the tilting cinema-seat style. 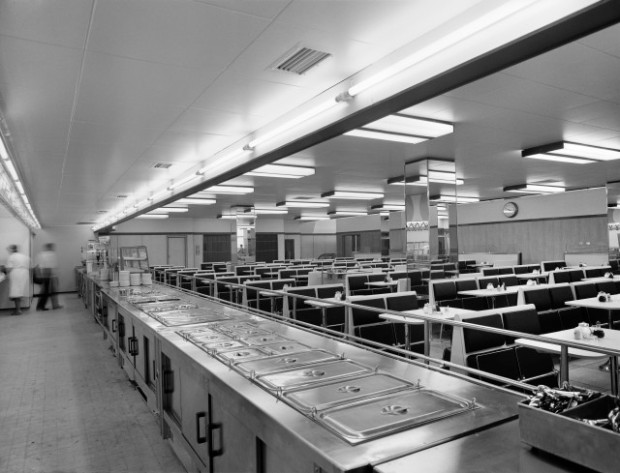 This swanky new superstore Woolworths only lasted 26 years, as it was sold by Kingfisher in 1984. It was redeveloped as the White Lion Walk shopping precinct. I have taken a screenshot from Google Maps today, where you can see White Lion Walk, Next and Starbucks are where Woolworths was – the neighbouring stores are as they were (compare it with the 1958 photo). The whole store was demolished all the way to North Street to create this shopping precinct.

In 1993, Woolworths returned to Guildford on Friary Street as Store 1185. This store will be covered in a separate blog post in the future.